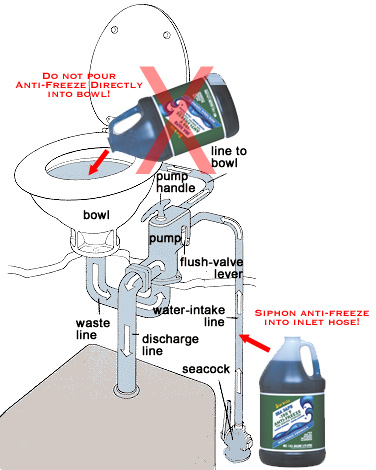 Add a few gallons of non-toxic antifreeze to the empty tanks and pump the fluid through each faucet until the color is pink. Don't forget the deck wash down pump, cockpit shower, shower sump, and electric head. Salt water deck washes will have a dedicated pump which some electric heads share. On stand alone pumps like these, remove the intake hose and suck non-toxic antifreeze through the system. ALWAYS properly reconnect hoses when finished.

When winterizing your marine toilet, remember to draw the anti-freeze up from the inlet hose that connects to your seacock instead of directly into the bowl; Otherwise you'll bypass the pumping mechanism! If the system has a direct discharge valve, pump a half gallon overboard, then a half gallon into the holding tank.

Pour non-toxic antifreeze into the bilge and operate all pumps.

Some anti-freeze has been known to degrade waste hose, so a good practice is to avoid allowing anti-freeze to collect in this hose. You may benefit from disconnecting the hose and draining any fluid off.

Winterizing your outboard motor should be performed after your haul out. Flush with fresh water for 15 minutes. To be on the safe side, run a half gallon of non-toxic antifreeze through the system. Four stroke outboards will need an oil and filter change. For all engine types, remove the spark plugs and spray a "fogging" oil into the cylinders. Replace the plugs and turn the engine over but do not run it. Drain the lower unit and replace lube oil. Even when dirty, the oil should be translucent. If it looks like dirty mayonnaise, water is leaking through the shaft seals. Have them replaced.

Inboard engine winterization should be performed after your haul out. All salt water must be flushed from the engine. An easy method is to open the sea water strainer, remove the basket and put a garden hose into the bowl. Start the engine, and adjust the flow of fresh water. The seacock to the strainer must be closed to create suction. After operating temperature has been reached, run for an additional ten minutes.

Change the engine oil and filter. Change the fuel filter if required. Inspect the gear box and replace oil if required. Note: ALWAYS remove the foil seal on engine oil bottles COMPLETELY. Pushing it in like a flap increases the odds it will break loose and get poured into the valve cover.

If the stuffing box is a dripless PYI type, loosen the collar and let the bellows expand, as per the instructions. Otherwise, inspect the traditional stuffing box packing for signs of wear on the shaft. Test the antifreeze in freshwater cooled engines. Inspect the water pump impeller, anti-siphon vents, and engine control cables - particularly the swivel ends. Inspect the cables, chains, and pulleys on pedestal steering systems, or else check the fluid in hydraulic steering systems. Inspect the packing gland on the rudder. Make certain all seacocks are sound. 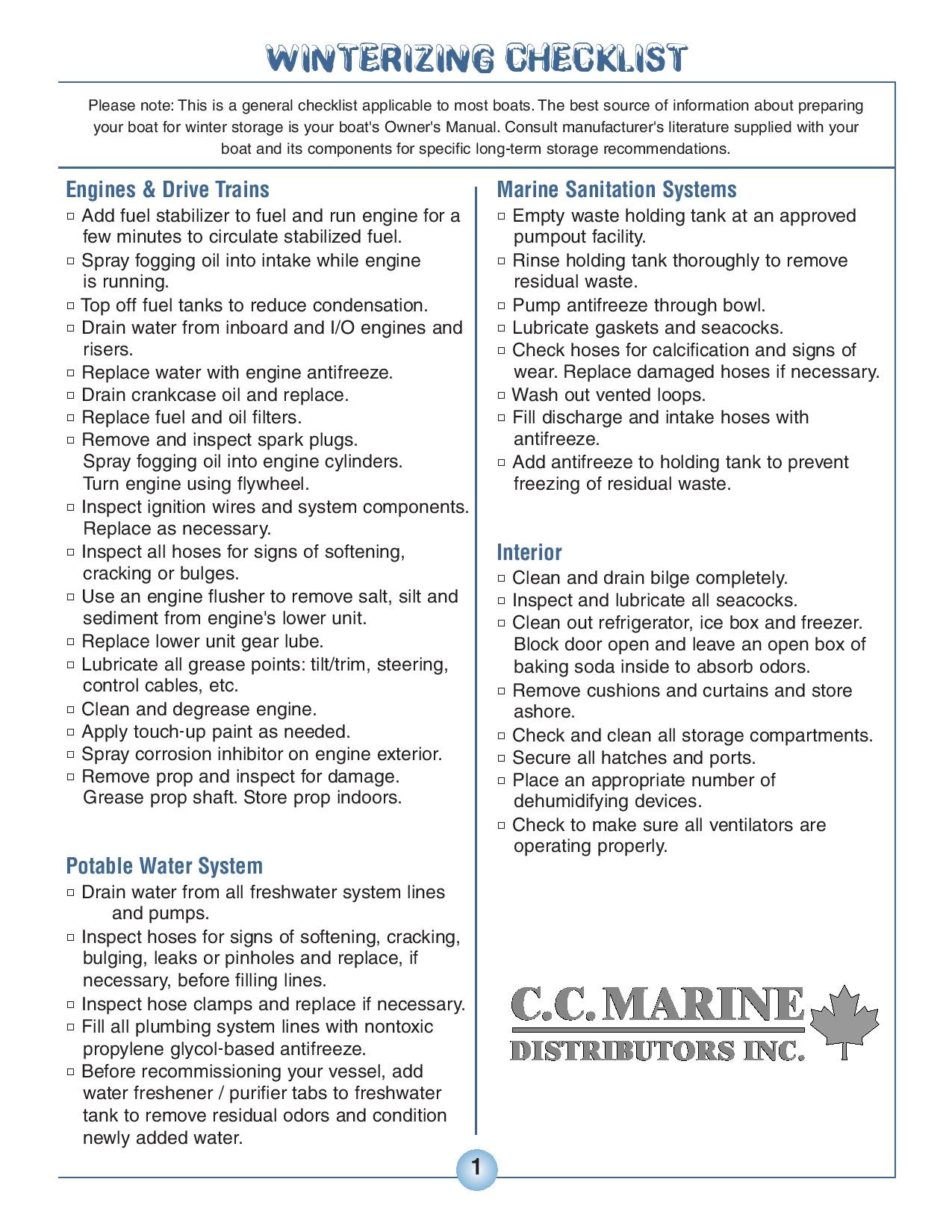