HOW TO LAYER CLOTHING: THE OUTER LAYER

The outermost layer is called the outer layer (also known as the shell layer), but only if they block wind or water, or have good mechanical strength; as long as the units block wind or water they classify as an outer layer. If wind or rain can get through them, they are mid-layer clothes.

Ideally the shell layer lets moisture through to the outside (that is, is breathable), while not letting wind and water pass through from the outside to the inside. While this is enabled to some degree by modern materials, even the best and most expensive materials involve a trade-off between breathability and water/wind resistance.

If heavy sweating is expected, one should avoid wearing any shell layer garments unless their protective properties are essential. For example, when one is jogging, no shell layer is likely to be able to transfer enough moisture to keep the wearer feeling dry. Instead, one should consider using sufficiently warm mid layer clothes.

Plastic raincoats protect completely from water and wind, but let through no moisture. To compensate for that, such raincoats usually have flap-covered holes and are very loose-fitting at the bottom to allow air circulation.

Waterproof breathable (hard shell) materials are waterproof and somewhat breathable. Their essential element is a thin, porous membrane that blocks liquid water, but lets through water vapor (evaporated sweat). The more expensive materials are typically more breathable. An example of this is the well-known brand Gore-Tex.

Water resistant (soft shell) materials block water only partially. On the other hand they are usually more breathable and comfortable, thinner, and less expensive than completely waterproof materials. Water-repellent coatings are often used. Before waterproof-breathable shells were invented, the "60/40" (60% cotton, 40% nylon) parka was widely used. Soft shells are not water "proof".

The term Soft Shell is increasingly used to describe garments that combine partial water resistance with partial wind breaking ability. Soft shell fabrics come in numerous varieties with many garments offering a combination, such as a wicking layer. In many cases insulation is combined in an attempt to replace several layers with a single highly flexible one.

We list Soft Shell products in our "Mid Layer" category.

For outerwear, a good rule of thumb is that if water isn't beading on the fabric, you need to wash your gear. As you might suspect, many outer layers do not need to be frequently washed and could compromise water-repellent treatments they may have. However, some manufacturers, such as Gill, are designing outer layers that "regenerate" their shell when put in the clothes dryer. Refer to the manufacturer for such details.

Don't forget to stay hydrated when outdoors. The effects of dehydration will counter act the effectiveness of your layering system and your body's ability to keep you warm.

Of all the investments boaters make towards their boats, there is one vital piece of valuable equipment that is constantly overlooked. Their bodies! This piece of equipment needs constant attention, maintenance and protection from the elements in order to continue operating at a high level of performance in a harsh, marine environment. So why do so many boaters wear clothing that keeps them cold, wet and on the verge of being miserable?

The purpose of this article is to not only introduce you to the technological advancements made in marine clothing, but hopefully guide you on the fine art of layering and dressing for success. A simple change in how you dress might help keep you dramatically drier, warmer, safer and happier on the water! 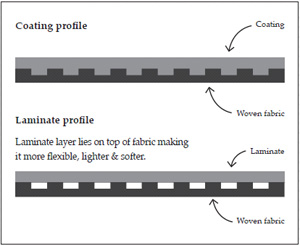 According to Nick Gill (of Gill Apparel), fabrics in marine clothing have changed enormously over the last twenty years or so. In the days of PVC coated fabrics, like the fishermen still wear today, the coating would be on the outside. The material was probably made up of eighty percent coating and twenty percent textile. Today it is the complete opposite, with lighter coatings and a textile fabric on the outside. The general trend is to lighter, more textured fabrics and this will continue.

Generally speaking, there are two types of fabrics. Coated fabric and laminated fabric. Coatings are the more traditional approach. A Polyurethane based resin is spread onto a woven fabric, a bit like butter is spread onto toast. It first has to fill in the weave undulations to seal it and then build up a layer that covers it all evenly.

A more recent development is the introduction of laminates. A laminated waterproof fabric is made by spreading the coating resin onto a long roll of non absorbent paper. This means the coating thickness can be finely controlled. The paper and waterproof film is then laminated to the textile woven fabric and the paper is removed. The end result is a fabric that is lighter, whilst being just as waterproof. It is more flexible, softer and much more comfortable to wear.

A two layer fabric is a woven textile with a laminated or coated finish on the inside. In most cases the garment would then have a lining. This protects the coated surface and makes it more comfortable to wear as an unlined fabric may feel a bit clammy. The advantage of two layer fabrics are that they are generally lighter and less expensive to produce. Examples would be Inshore/ Coastal sailing waterproof clothing and Dinghy Wear. 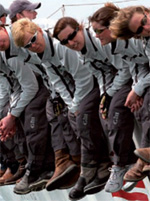 Three layer fabrics take the two layer material and laminate and add Tricot Scrim on the inside of the fabric to protect the coated surface. Inevitably it makes the fabric a little heavier but this can be offset because the garment does not need a lining. It is a modern misconception that lined garments are better, they can reduce breathability, increase weight and add a layer to get caught and snagged. Three layer garments are considerably more expensive to produce. The speed at which the seams can be sealed is slower and the sealing tape itself is much more costly. Examples are garments where a higher degree of durability is required such as Keelboat Racing, Offshore and Ocean garments.

A breathable fabric is one that allows the warm moist air created by your body to pass through the material rather than build up as condensation on the inside of the garment. There are varying degrees of breathability. Whether condensation will occur can depend as much on the aerobic activity of the wearer as the conditions in which the garments are being used. There is no such thing as a condensation-free fabric.

With moderate exertion our bodies give off about half a litre of moisture vapour in one hour. This is the body's natural cooling system. To prevent discomfort, this moisture must evaporate and not be built up inside the clothing system.

Breathable fabrics are made in two ways. Micro porous and Hydrophilic.

Breathability is reduced by linings and areas of double thickness of fabrics, such as pockets, flaps over zips and collars, reflective panels etc. So whilst we might start with a very breathable fabric, we have already reduced its effectiveness by the time it has been made up into a garment. Breathability is then reduced further by what is being worn underneath. For example, wearing chest high trousers can result in an extra two layers of fabric in the middle of the garment. Under these there could be a mid-layer and thermal underwear. All this layering is technically correct to maintain body temperature and move moisture away from the body, however, at the same time it reduces the overall breathability of the system.

Don't be put off by a simply designed garment. Garments without linings will be more breathable than those with linings. The fewer pockets and flaps, the more breathable it will be. It is not just the garment design that is important but also the fit. For a garment to breathe properly the air needs to circulate as you move about. This is one reason people in very hot climates wear loose fitting flowing garments. A garment that is too tight on the other hand can not move the air sufficiently to aide the breathing mechanism.

THE 3 LAYERS: A REVIEW

Base Layer: By wearing a thermal underwear base layer, it can physically wick the moisture away from the body (polyester absorbs less than 1% of its own weight in moisture), keeping you dry and warm even after a burst of activity. This first layer or base layer is known as the wicking layer and its main purpose is to keep you dry next to the skin.

Mid Layer: This second layer is the insulating layer. This is the buffer between the warm skin and the cold air outside. It is important that this layer is highly breathable and any moisture can continue its journey into the great outdoors. Traditionally mid-layers have been fleece based garments with or without a windproof shell. More recently Gill has developed mid-layers using ultra compact synthetic insulation. The material is hydrophobic meaning water hating, it will not absorb water and can keep you warm even if wet.

Outer Layer: This is where the real protection against the elements takes place and it must be completely water and windproof. It should include a hood and collar system, protective flaps over the front zip and adjustable inner cuffs. In order to work most efficiently, the fabric should be breathable, thus allowing the moist air that's built up inside the garment to escape.

Thanks to Gill for providing the above information! To learn more about Gill, you can visit their site, or shop for Gill gear here at Pride Marine! 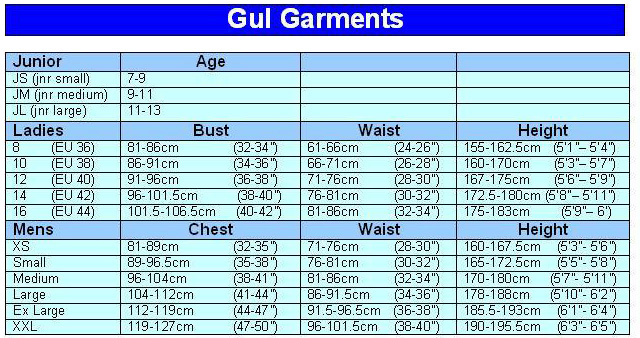